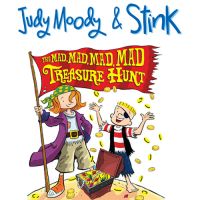 Adapted for the stage by Allison Gregory; Based on the book series by Megan McDonald.

Judy Moody is off on a swashbuckling adventure to Ocracoke Island, a mysterious place packed with treasure hunts and pirate gold. Will she and her little brother Stink be able work as a team to win the coveted Pirate Challenge? Anchors away!